What else is there to say other than why the hell not? For this week’s Well-Loved Hero Wednesday, I decided to stat out the most hilarious console advertisement of all time. Throwing everyone and making them blow up. Carrying a Sega Saturn on his back and his fists ready for battle, Sanshiro is not one to mess with. Bow before the only man that could save the Sega Saturn in Japan. He’s a beast of a combatant, and may cream the average team if they chose precision as their lowest overall stat. 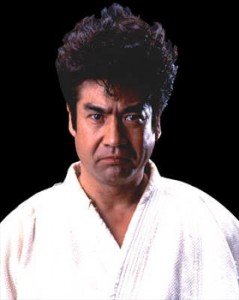 Abilities:
Level 1:
Fist of My Head, Foot of my Crotch! (Passive): Any body part can be used for unarmed attacks.

Level 2:
The Strength of a Doctor (Cost 3): Gain +4 to Body to Lift things.
Unlocking Potential (Cost 6): Raise an attribute of your choice by 1 for remainder of battle.
One in a Million (Cost 4): -8 to hit. 10 range. 30 damage.
Agile Rejuvenation (Passive): +2 Life when dodging an attack.
Nowhere to Run (Passive): Double range of thrown or ranged attacks.

Level 4:
Aura of Significance (Cost 16/turn): Cannot be attacked that turn and all allies have a -2 to hit them.
Lord of Parries (Cost 8): Use Precision -2 for dodge instead of agility.
Pose and Explode (Variable): Do 15 damage per awesome point gained in a 3 square radius after doing a stunt at the cost of the awesome points gained.
Path of Least Resistance (Cost 6): Take a turn off. Gain a +4 to all rolls next turn.
Even the Playing Field (Passive): +1 to all combat rolls when fighting alone.

Level 5:
Ebb and Flow (Cost 15): Return double damage of an attack that missed you.
Passion Rising (Passive): +20 Max Life
The Cost of Power (2 Life per 5 Damage): Gain 5 damage per -1 taken on attack roll down to 1 minimum.

Description: Here he is. Segata Sanshiro in all his hilarious and amazing glory. He’s 180 points to represent his truly epic glory. While most players won’t see their characters achieve this much, most players also won’t gain the reputation Segata Sanshiro has. Terrorizing children, teenagers, and young adults over not playing Sega Saturn, Segata Sanshiro trains to prove that it is the greatest video game console of all time. His fighting style rotates around his ability to throw people over his shoulder and 20 feet away, and he can do it with his high body and shockwave launcher/slam. Despite his high Will, Sanshiro uses it almost exclusively for life and being terrifying. He doesn’t seem to understand the subtleties of diplomacy or subterfuge (although, he’s got seduction down somehow). He burns out fast in combat unless approached by a hoarde of enemies, but that’s going to be a VERY violent few turns. Finally, If I Go Down, I’m Taking You With Me! allows Sanshiro to go down in a bang when he declares a death duel against a missile and fights it to a tie. Used in your actual games, he’s best suited to 1 on 1 combat, but can take on many targets provided they don’t have high precision to match his 6 average dodge. I was tempted to give him Legendary Status, but few have actually heard of him, and his aura of significance covers it nicely. I was also tempted to give him Lightspeed Metabolism, but that’d be cruel.

Well, that’s another Well-Loved Hero Wednesday done. Did you enjoy it? Did you notice you only got 1 ridiculously powerful character instead of 2 merely super powerful characters? Did you care? Are there any characters you want to see in future updates? Did we miss any abilities of Segata Sanshiro? Leave a comment or send an e-mail and tell us what you think. See you next week.