I promised you an Equinja, and here we are. I was actually tempted to do Celty from Durarara, but:
1. I haven’t seen far enough to stat her out entirely.
2. I felt like doing something a bit lower point for once.

So, here’s Kaneda from Akira (yes, the guy with the cool bike). 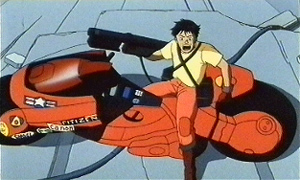 Abilities:
Level 1:
Born in the Saddle (Passive): +2 to Ride checks
The Fist of Justice (Cost 3): 10 damage punch that can’t be concealed.
Perfect Momentum (Cost 2): +1 to hit as long as you hit last turn.

Level 2:
The Ghost in the Machine (Passive): Ride non-living Rides.
Crash the Gates (Cost 4): Move in a straight line for 15 damage.
Drive By! (Cost 6): Make a move action and hit everyone you touch for 5 damage.

Level 3:
Rev Your Engines (Cost 3): Triple movement speed as long as the ride goes in a straight line.
Hit, Stall, Spin (Cost 6): Hit a target for 15 damage and knock them back 5 squares.
Catch Some Air (Cost 10): Do 25 damage if hitting a target after launching off a ramp.
Together We Ride (Passive): Allow others to ride on rides

Level 4:
Nothing Gonna Break My Stride (5 Life or 1 Awesome Point): Drive through walls

Level 5:
Wear the Scarf (Passive): Gain 2 Awesome Points at the Beginning of each Session

Item:
Laser Cannon (8): Gives access to Bullet #9 Skill.
“That One Awesome Motorcycle From That Old Anime” (Mount): Has a move of 30 squares a move action, has a -2 to ride checks, and has an effective body of 8 for carrying people.

Description: Here he is. A veteran bicycle gang leader. He can take out most standard civilians and adventurers, but he still isn’t capable of holding his own in a fight against a more combat experienced target. He does have a nice bike and a gun that gives him a move he normally wouldn’t be able to access though. Kaneda’s also not the best fighter or biker, but he is tough and can take a hit. Also, he has 2 free awesome points for when he really needs them. So, he’s not one to underestimate. What he can’t accomplish with his low precision score, he can accomplish with low life cost moves that do decent damage and a hefty life score that can keep him going for a while.

There. We’re caught up now. Tomorrow I’ll post a Theory Thursday on the Equinja as well. How’s everyone enjoying the themed week so far. I know the updates have been clustered together, but hopefully they’ve been interesting enough to be worth the wait. At the very least, the creation of a new faction should give you something to fiddle around with.